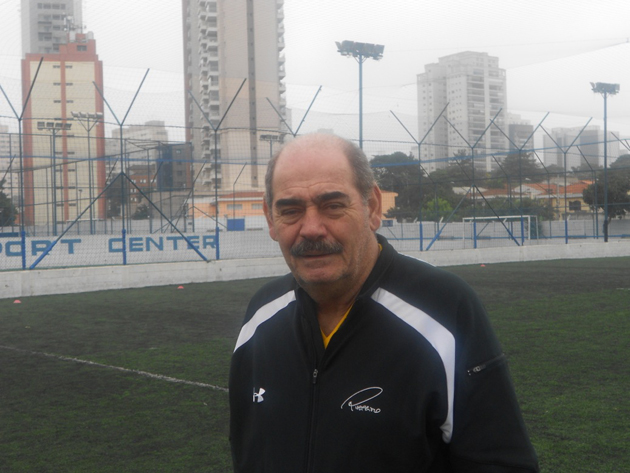 Roberto Rivellino is a true icon of Brazilian football and a World Cup living legend.

He was part of the legendary 1970 Brazil national squad, considered by many as the greatest football team of all time. Alongside the likes of Pele and Jairzinho, he played a major role in crowning Brazil with the 1970 FIFA World Cup trophy,during an international career that saw him representing the Seleção in 92 games and taking part in two more World Cups.

The tricky attacking midfielder tortured world class goalkeepers with his powerful and extremely accurate left foot, and dazzled some of the toughest defenders of his time with an array of tricks and flicks, that include the famous “Elastico”, the move that was later mastered by the likes of Ronaldinho and Cristiano Ronaldo.

At club level, Rivellino spent most of his career at his home city São Paulo, with Corinthians, before deciding to move to Rio de Janeiro’s Fluminense in 1973, leading his new club to two successive titles in the Campeonato Carioca during a decade that saw the team earning the nickname of “Maquina Tricolor”.

In 1978 he joined Al Hilal of Saudi Arabia, becoming the first Brazilian world class player to join a club in the Gulf region. In his first year with the Saudi club, and with his compatriot and World Cup winning coach Mario Zagallo at the helm, Rivellino scored the winning goal in the final game of the season against their arch-rivals AL Nasr to lead them to what was only their second league title. After three seasons in Saudi Arabia the Brazilian legend decided to hang up his boots.

Nowadays, Rivellino is working as a television pundit, besides managing his own soccer school at São Paulo.

In an interview with Football Qatar reporter Samindra Kunti, the Brazil legend talked about 1970 Brazil team, Pele, his left foot, the Elastico, Neymar, Saudi Arabia, protests in Brazil and much more,

You were part of the great 1970 Brazil team, what does that mean to you?

It brings me extreme joy. That was my first World Cup and it was a Brazil team that enchanted the world. Until today, it isstill considered the best team of all time. The team had a number of great players. I am very happy with it. The main reason why you are here is the Selecao of 1970! It was a wonderful team.

Who were your favorite players of that team?

That is difficult. There were many good players. All of them were good, even substitutes Paulo Cesar and Edu whom I admire. I donot have a preference – Pele, Jairzinho, Tostao, Gerson, Clodoaldo, Carlos Alberto Torres. I have always had a good relationship with them.

Talk to us about Pele, was he in your opinion the most important player in the squad?

Yes, without doubt. He was and is O Rei – the king of futebol. He was so intelligent that he made it a question to be part of the group. There was no obligation to pass the ball to Pele to resolve the problems. But if you analyze it, he was already a double world champion, and it was a World Cup that he really wanted to win. Pele was the most important player. Gerson with his ‘lancamentos’ was fantastic too. He knew how to organize the midfield.

In the final you defeated Italy 4-1? Tell us more about that game?

Of all the games, the last game against Italy was maybe the easiest. Brazil scored 1-0 and Italy equalized, but Brazil controlled the game. Gerson scored the second Brazilian goal, and it was a great game. The moment I will never forget, is the last goal. I think all the Brazilian players touched the ball, without any Italian touching it and Carlos Alberto scored a goal of pure gold. The most beautiful goal of all. A remarkable goal and I will never forget it.

The secret of that Brazil team was the physical preparation?

No, every player had great technical potential. They all had great qualities. The physical preparation was also important, but just a part of it. It is logical that the better you are prepared the more you benefit from it.

The goal you scored against Czechoslovakia in 1970, was it your favorite goal?

No, I donot have a favorite goal, but it came at an important moment, as Brazil was a goal down. When we left Brazil, no one believed that Brazil could go beyond the group stages. Everyone waswaiting to see what will we do in the opening game and suddenly we found ourselves trailing by a goal. I equalized. The goal was beautiful and very important, because it calmed down the team. We ran out 4-1 winners at the end. It was one of the most important goals in life.

Your coolest memory in the shirt of Brazil?

Every moment at the Selecao is nice. That moment when Pele rounded the Uruguayan goalkeeper in 1970 and didnot score was wonderful, but all World Cup moments were important. You see the movie in your head again and again. Everything is in my head and with the World Cup 2014 taking placein Brazil I play it more often. Obviously, 1970 was an important moment for me because Brazil won.

The powerful left foot and the “Elastico”

Tell us about your powerful left foot, how did you develop that skill?

God gave me that gift, and I am very grateful, I have always had that ability andwhen I went to Mexico in 1970, I was given the nickname ‘PatadaAtomica’ [Atomic Kick]. That ability helped me a lot in my career. It facilitated long passes and crosses.

You also invented the dribble called the Elastico?

No, I actually didnot invent it. I learned it in 1964 it from a Japanese-Brazilian player with the name Sergio Echigo, who played with me at Corinthians. I saw him dribbling that way and I asked him – what are you doing? I started to imitate that dribble and I perfected it. He retired and went home to Japan, and I continued playing. It is my trademark, but I learned it from Echigo.

How did the Saudi Club Al Hilal convinced you to come and play for the club?

After 1978, I heard there was interest in my services from Saudi Arabia. I already knew Saudi Arabia, because Brazil once played a friendly in Riyadh before the 1978 World Cup. They made a good proposal and I accepted. Until today, many people consider me as one of the greatest players to play in Saudi Arabia. During my three seasons at Al Hilal, I spent happy times,we won two titles and I was the first Brazilian to play there.

Before that you never played for a club outside Brazil, was it challenging to play in a new country?

Football is universal language. In Saudi Arabia, football was relatively new, it was still amateur, butthere were players with potential. Obviously, I needed to adapt to the Arab habits, it was difficult but I adapted well, it was also very hot and they played in the afternoon. I had never played on an artificial pitch before, but at the end, I managed to adapt very well. There was mutual respect between the local players and me.

Which players do you remember from that time?

I remember Tunisian striker ‘NejibLimam’ who was very skillful. Samir at the midfield was very good as well. At the time, our captain Salim was also a fantastic player. In goal, Ibrahim did a good job, and our coach was Mario Zagallo.

Zagallo was influential in guiding the team to the league title in your first season?

Zagallo was excellent. He is a great coach. I scored the winning goal against Al Nasr, our big rival. There was a big rivalry between Al Hilal and Al Nasr. Everyone at Al Hilal considered me a hero on that day.

You have watched Saudi Arabia playing four times at the World Cup since 1994, what do you think of the team’s level?

It is getting better, but the progressis slow I think. If you look at the United States and Japan – they started their football development after Saudi Arabia, but they have grown much more. You have American and Japanese players playing in Europe, but you donot see Saudi Arabian players in Europe. In Saudi Arabia, they love and adore football, but the professionalism still needs more development.

What do you think of the protests against the 2014 World Cup in Brazil?

Is Brazil the favorite to win the World Cup?

I think this World Cup has a number of favorites. Germany is at a good level, Argentina is slightly better. Spain is aging, but remains strong. The World Cup is a short competition. After four or five games, you already gone very far. Brazil is a favorite and with its Confederations Cup campaign, they brought the fans closer to the team.

What is the weak point of the Selecao?

It is the attack line. In the past, Brazil always had great offensive players, but today, they only depend on Neymar. He is the only player that I see who has something creative. The other players are more tactical. In the midfield and attack there is no creativity. These two lines worry me. There are no thinkers. Over the past decades defense was never the best line in the Brazil team, but today, Thiago Silva and David Luiz are far better than the Brazil’s attack.

Don’t you think thatother sides too depend on one or two players?

Argetina donot depend on Messi alone. They have Di Maria, Aguero and other players. Germany has Ozil, but also Schweinsteiger, Muller and others. Brazil doesn’t have this. Portugal is in the same situation like us. They have Cristiano Ronaldo, but they might surprise. England has only Rooney, and they are not very strong. Spain has Xavi, Iniesta and others. There is no dependence on one player. With Brazil, it is Neymar, Neymar, Neymar and Neymar again. Willian is an interesting player. He is in a good moment and he tries to create. In 2002, Brazil had Rivaldo, Ronaldo, Cafu, Roberto Carlos and Ronaldinho. Brazil is poor in this aspect today.

Can Neymar be the best player in the world?

He is still young, but has everything to become the best player in the world. Neymar is an interesting player. I think he has had a good season at Barcelona, despite all the critiques. Now he is under a lot of pressure in the national team, he has to resolve all the problems of Brazil. It is too much. It is unfair that it is only about Messi and Ronaldo when it comes to choosing the best player in the world. If Ronaldo does not win, then Messi do and vice versa.