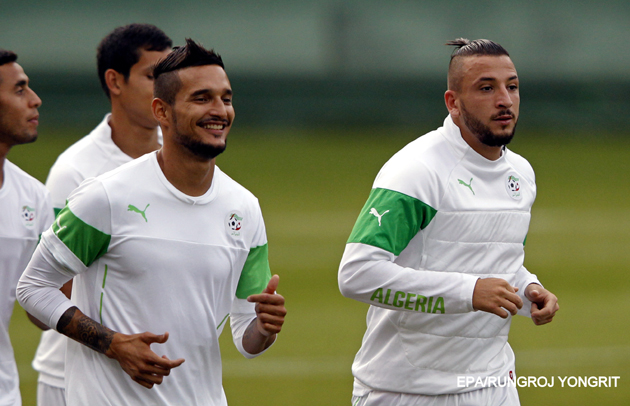 With history already made, it is all now about revenge for the Algerians.

That’s what almost every fan of Algerian football is talking about at this moment, even those who were not born or were not old enough to experience the “Disgrace of Gijon” in 1982.

“The Disgrace of Gijon” was the name given to the 1982 FIFA World Cup match between West Germany and Austria.

It was the final game of Group B, and with the Algerians, already defeated West Germany 2-1 and Chile 3-2, looked certain of a place in the second round unless the Germans defeat the Austrians, and they did it by a single early goal from Horst Hrubesch, but the result do not reflect the actual events of the game.

After Hrubesch scored, both teams looked happy with the result that will take both of them to the next round, no serious attempts were made to score and every single fan at El Molinon Stadium was fuming with anger.

Both sides were never officially blamed for the apparent disgraceful act, but after that game FIFA decided that both final matches of any group must be played at the same time to minimize the possibility of match fixing.

The Algerians never forgot this match, and each generation told the story to the next one, and as a result the atmosphere is expected to be tense in tonight’s game at Estadio Beira Rio in Porto Alegre.

The Algerians are making their first ever appearance at this stage, after finishing second in group H. They started their campaign with a 1-2 defeat to the group winners Belgium, and then followed it with a 4-2 victory over South Korea; the biggest ever win for an African side in the World Cup. A 1-1 draw was enough in the final game against Russia to go through.

The efforts of their goalkeeper Rais M’Bolhi during the group stage were influential, and he is expected to continue his great performances today against the talented attack line of the Germans that will provide the ultimate test for the experience centre-backs Rafik Halliche and Madjid Bougherra.

Inform Sporting Lisbon striker Islam Slimani scored against South Korea and Russia, while winger Yacine Brahimi of Granada has shown a lot of skill that proved his reputation as one of the best dribblers in Europe, and both players can cause a lot of problems to the German defense.

Meanwhile, Germany will lose the services of Lukas Podolski who is out with a thigh injury and Mario Goetze is expected to take his place. Bastian Schweinsteiger also might get as starting spot ahead of Sami Khedira who missed most of last season with a knee ligament injury and only made his return in May.