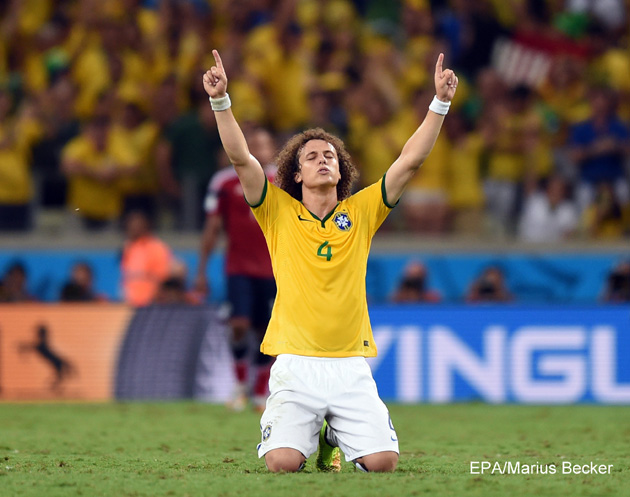 Brazil scrambled to a 2-1 victory over Colombia to reach the semifinals of the FIFA World Cup for the first time since 2002, but the nation’s hopes of winning their sixth title in the competition suffered a huge blow in the closing minutes of the game when Neymar picked up a nasty back-injury that ruled him out till the end of the tournament.

Neymar has been in great form since the opening game, and his efforts were crucial in taking Brazil to this stage, but a reckless challenge from Colombia’s right back Juan Zuniga left the FC Barcelona forward with a fractured Vertebra and the Brazilian fans in a state of shock.

As expected, with the absence of Luis Gustavo, Paulinho started in the Brazilian midfield alongside Fernandinho, but the surprise move from Luis Felipe Scolari came in the right back department, as Maicon was handed a starting spot instead of Dani Alves.

Brazil dominated the first half taking the lead after only 8 minutes through their captain Tiagho Silva who was left completely free at the unguarded far post to slot home Neymar’s corner.

Colombia goalkeeper David Opsina made crucial saves later in the half from Oscar and Hulk to keep Los Cafeteros in the game.

Colombia equalized in 68th minute when Mario Yepes benefited from a scramble inside the box to send the ball home from close range, but the goal was disallowed for a controversial offside decision by the Spanish referee.

Brazil replied immediately with a stunning free kick from David Luiz that gave Ospina no chance as it rocketed into the top corner.

With 20 minutes to go, Jose Pekerman decided to replace the ineffective Teofilo Gutierrez with Carlos Bacca, who made a quick impact ten minutes later when he was brought down by Julio Cesar in the box to earn his side a penalty.

James Rodriguez made no mistake from the spot to score his sixth goal in the tournament, and go into history books as the first player to score in his first five consecutive matches in the World Cup since Peru’s Teofilo Cubillas in the 1970’s.

The Colombians pushed forward for an equalizer in the final minutes, but the hosts held on for the victory to earn a place in the last four, where they will face Germany on Tuesday.