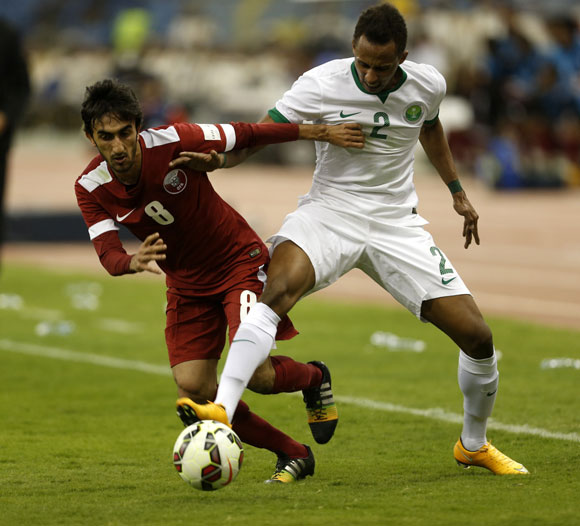 Horrific misses from Abdul Kader Ilyas and Bouallem Khoukhi saved the day for hosts Saudi Arabia as they struggled to earn a point against Qatar in the opening game of the 2014 Gulf Cup on Thursday in Riyadh.

Al Annabi’s performance was just another proof of how much the team improved in the past few months with Djamel Belmadi at the helm. After leading Qatar’s B squad to the WAFF Championship title earlier this year, the Algerian coach took charge of the national team last March, replacing local coach Fahad Thani.

The Saudis came close to an opener after 19 minutes, but Qassim Burhan did well to parry away Saud Kariri’s towering header with a one-handed save.

A couple of minutes later, Ilyas battled his way inside the Saudi penalty box surrounded by four defenders, and somehow he managed to hit a low shot that needed the slightest of touches from goalkeeper Waleed Abdullah to go inches wide.

Ilyas was once again in the heart of the action, when he received the ball inches away from an empty net after good work on the left from the versatile winger Hassan Al Haydos. The Saudi-born striker who plays on loan at Umm Salal, completely unmarked, could only send the ball wide.

The home side started to feel the danger and focused on retaining possession, and in the 37th minute a 15-consecutive-passed move ended with Nasser Al Shamrani receiving the ball inside the penalty box with plenty of space, before sending a low cross to the completely unmarked Fahad Al Muwallad who made no mistake from close range to give the Saudis the lead.

Al Muwallad was on target again in the first minute of the second half but his goal was canceled for a foul on Abdul Karim Hassan.

Belmadi’s interference was crucial in the second half bringing on Ali Asad to replace the Wissam Rizk. The Al Sadd youngster added more flair and creativity to Al Annabi midfield, and with the introduction of Khoukhi Bouallem minutes later to replace Ilyas, things started to go the visitors’ side.

The solid performance of Karim Boudiaf in the midfield should also be noted, he was at the heart of the action during the 90 minutes making a number of crucial interceptions and keeping Al Annabi in control of the game.

Abdul Karim Hassan sent a wonderful long range effort in the 52rd minute, that was brilliantly saved by Abdullah, and from the resulting corner Al Haydos sent a perfect cross that found its way to the far post as Ibrahim Majid was waiting to head it home.

Qatar should have taken the lead after 66 minutes when Asad found Khouhki inside the box with a perfect through ball, but with only the keeper to beat, the Al Arabi midfielder could not hit the target; another incredible miss.

Al Haydos shot from the edge of the area went close, before Bouallem missed another easy chance as Saudi Arabia coach, Juan Ramon Lopez Caro made few changes to his side hoping for a late winner, by introducing Salem Al Dosari and Nawaf Al Abid.

Qassim Burhan could have ruined the day for Qatar when he failed to handle a cross and spilled the ball in the closing minutes of the game, Omar Hawsawi was in the right place to finish the game but the Al Gharrafa goalkeeper was quick to respond, blocking his powerful shot.

Next for Qatar will be a must win game against Yemen on Sunday. Al Annabi will be the favourite to win this game but the Yemeni side showed yesterday what they are capable of, as they held the more experienced Bahrain to a 0-0 draw.