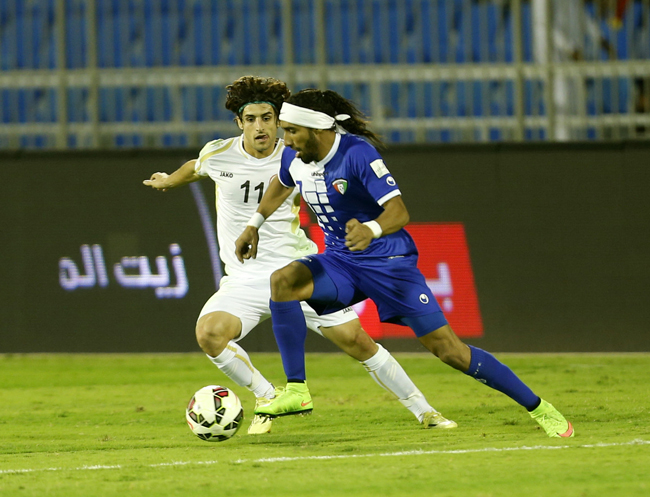 In a game that saw few chances for both sides, Fahad Al Enezi stunned Iraq in the closing seconds of the 2014 Gulf Cup Group B game to seal a memorable victory for Kuwait.

The 2010 Gulf Cup MVP received the ball near the edge of the box, and made space for himself before unleashing a powerful well-curled shot into the top-right corner of Jalal Hassan’s goal.

It was a memorable night for Kuwait coach, Jorvan Vieira, who led Iraq seven years ago to their first ever AFC Asian Cup title.

US-born Justin Meram was the main attacking threat on his Iraq debut. The 25-year-old was denied an opener in the closing seconds of the first half thanks to a crucial goal line clearance from centre-back Hussein Fadel. The Iraqi players appealed for a penalty as the ball seemed to had hit Fadel’s arm, but the referee was not convinced.

Just after the break, Meram saw his long range effort hitting the post after a brilliant fingertip save from Nawaf Al Khaldi.

In the closing seconds of the game, Badr Al Mutawa, who was Kuwait’s best player in the attacking third, did well to create the winning goal for the ten-time champions who registered the first win of the 2014 Gulf Cup after the first three games ended in draws.