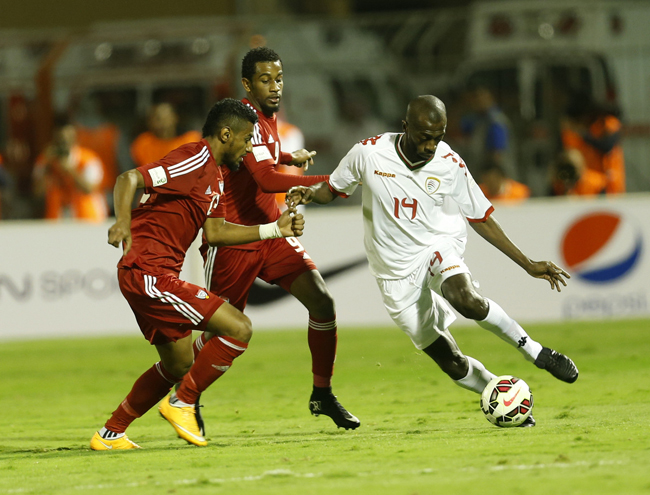 Defending champions UAE kicked off their 2014 Gulf Campaign with a 0-0 draw against Oman in Riyadh on Friday.

Both teams had their chances, with the best of them falling to the Emirati side who were denied by an in-form Ali Al Habsi.

The Brighton & Hove Albion goalkeeper showed great reflex as he stopped a powerful effort from Ismael Al Hammadi, before coming again to the rescue later in the second half to block another long range effort from the same player.

The early threat came from Oman, as Ali Khaseif tipped away a deflected free kick from Ahmed Kanoo after just six minutes, and the 2009 Champions should have taken the lead in the 20th minute when Qasim Said did well to find Mohammed Al Seyabi with a low cross, but the Al Shabab midfielder failed to hit the target from the edge of the six-yard box.

Al Hammadi also had a golden chance in the first half, when Al Habsi dashed out of his area to intercept a long pass, but the scorer of the winning goal in the final of the 2013 edition, could not direct his long range effort on the empty target.

Ahmed Khalil was unlucky not to get on the score sheet, as he saw his beautifully curled free-kick hitting the post.

The lively no.10 Qasim Said was a constant threat for the Emirati defense in the second half, but he failed to break the deadlock and had a goal annulled early in the second half for a foul on UAE’s defender Abdul Aziz Haikal.

All eyes were on the 2013 MVP Omar Abdulrahman, and he showed glimpses of brilliance and great vision especially when it came to perfect long passes and through balls, but the one who stole the show was his midfield partner Amer Abdulrahman who was impressive both in attack and defense.

Paul Le Guen’s side should be happy with a point against the defending champions, but they need to improve up front if they hope to snatch a spot in the last four.