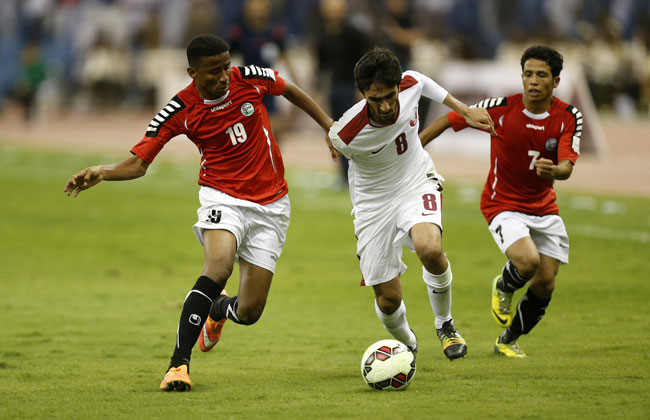 Qatar were left to rue their poor finishing as they could only manage a goalless draw against Yemen in the Gulf Cup on Sunday.

Both teams will go into the final group stage round with two points and with Saudi Arabia defeating Bahrain 3-0 today, Qatar now will need to defeat Bahrain on Wednesday to grab a semi-final spot. A draw might also be enough if Saudi Arabia defeated Yemen in the other game that will kick off at the same time.

Ak Annabi coach Djamel Belmadi made a couple of changes to the team that held Saudi Arabia to a 1-1 draw in the opening game of the tournament. Ali Asad replaced Wissam Rizk in midfield and Khoukhi Bouallem played as a lone striker, instead of Abdul Kader Ilyas.

Both players failed to impress, and despite Qatar having more of the possession, the best chance in the first half fell to the Yemenis following a defensive blunder by Al Annabi, but Abdulwasra Matari, with only the keeper to beat, failed to hit the target.

Heroic defending by the Yemeni centre-backs, Mohamed Fouad and Modar Abdrabo, in the second half, mixed with ridiculous time-wasting techniques, were enough to deny Qatar their first victory.