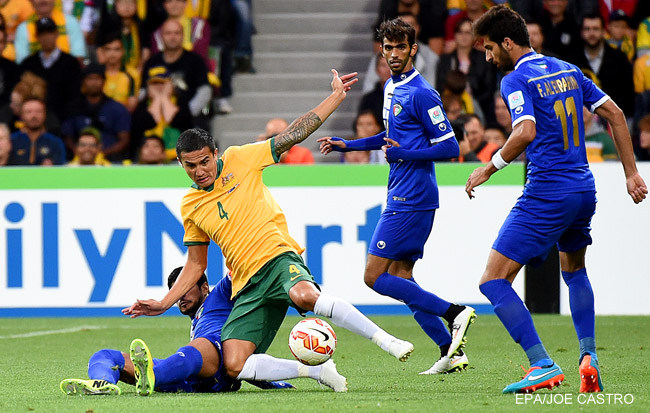 Australia came back from behind to beat Kuwait 4-1 in the opening game of the 2015 AFC Asian Cup at the Rectangular Stadium in Melbourne.

The visitors took a shock lead after only eight minutes through a near post header from Hussein Fadel.

But the Socceroos equalized on the 33rd minute through Tim Cahill who slot the ball home from closerange after good work from Massimo Luongo who gave the Aussies a crucial lead just before the break when he perfectly headed home Ivan Franjic’s cross.

The home side dominated the second half with the Kuwaitis unable to cope with the rainy weather, and Mile Jedinak added a third in the 62nd minute from the penalty spot, after Sultan Al Enezi brought down Robbie Kruse inside the box.

Chances fell for both sides to add more goals, but they were denied by the crossbars and some excellent goalkeeping until James Troisi sealed the memorable victory for the Socceroos in injury time, with a powerful close range shot, after a great display of skills and speed from Mathew Leckie who was in unstoppable form in the second half.