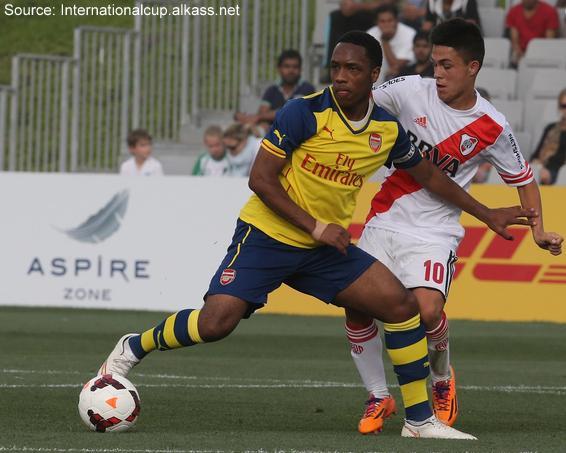 Arsenal deservedly triumphed 1-0 in a performance of great discipline to book their place in the semi-finals against a River Plate side who found defeat difficult to stomach.

Arsenal had deployed a 4-4-2 formation, with captain Kaylen Hinds and in-form StephyMavididi leading the line. The talented attackers worked hard to close down space, making it difficult for River Plate to play out from the back. Meanwhile, Argentinean right back Kevin Sibillehad his hands full as he sought to contain the strong running of the dangerous Willock.

At the other end, it was clear that Arsenal right back Jonatas Centeno would need to be performing at the top of his game to nullify the threat of Lopez, and he stuck to the Argentine winger like glue in the early stages.

On 17 minutes Mavididi turned smartly on the edge of the area to play right-winger Marcus Tabi in, but a superb sliding challenge from Jose Vivanco denied him a goalscoring opportunity. Two minutes later River Plate worked their first attempt on goal, with Arsenal keeper Hugo Keto saving Enzo Zacarelli