Defending title holders the Western Sydney Wanderers and FC Seoul produced a highly entertaining 1-1 draw in their Group H encounter held at Parramatta Stadium in Sydney last night (Tuesday 8 April). The game was played in ideal conditions on an excellent surface with light winds and a temperature of at kick off of 14 degrees, and yet disappointingly attracted a crowd of only 7,000.

After a somewhat cautious start from both teams, in the 12th minute striker Kerem Bulut of Turkish-Australian heritage pounced on a defensive lapse by FC Seoul. He fired home a right footed strike into the corner of the net to give the hosts a lead and much to the joy of the Red and Black Bloc (RBB) active supporters.

The response of their opponents was unconvincing, and the Wanderers had two golden opportunities to increase the lead with Labinot Haliti failing to convert consecutive chances when clear both times on goal. The visitors produced a counter attack two minutes from the interval, only for advancing goal keeper Ante Covic to come well outside the area in time to make the critical interception. 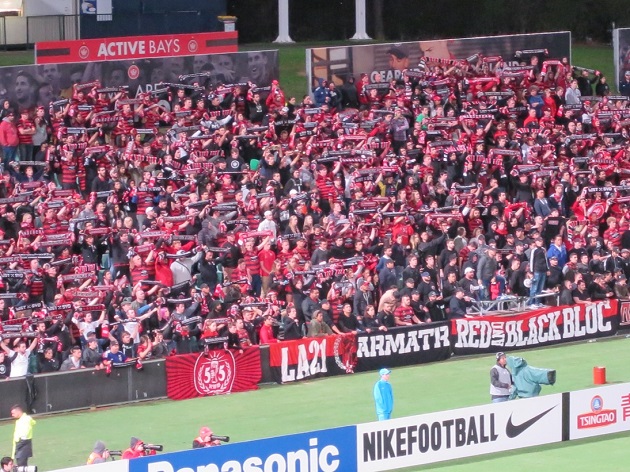 Soon into the second half it seemed tactical adjustments had been made by the FC Seoul coach Coi Yong Soo, with his side ramping up the pressure. On 52 minutes Mauricio Molina produced a thunderous long range shot that cannoned off the underside of the crossbar and bounced outwards to safety.