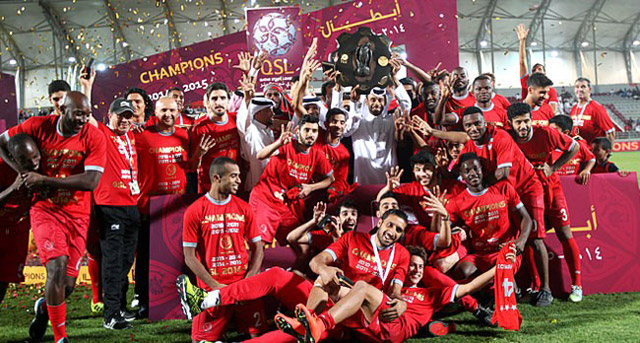 Going into the penultimate round of the season with a 5-point lead over second-placed Al Sadd, the defending champions only needed 12 minutes to open the score through Ismael Mohamed who made no mistake with a simple tab in to Hassan Afif’s cross.

But the visitors equalized after minutes through veteran striker Meshaal Abdullah.

Tunisia international Youssef Msakni benefited from a defensive blunder to put his team in front again after 25 minutes.

With Al Sadd seemed to be cruising for a comfortable victory over El Jaish in the other matchday 25 game played at the same time, another equalizer would have postponed the battle for the title to the final round.

Al Ahli came close a number of times, but it was Msakni who added a third goal for the hosts five minutes from time to send the crowd in a frenzy.

Michael Laudrup won his first league title as a coach since leading Brondby to the Danish SuperLiga title in 2005.The Danish legend took over last